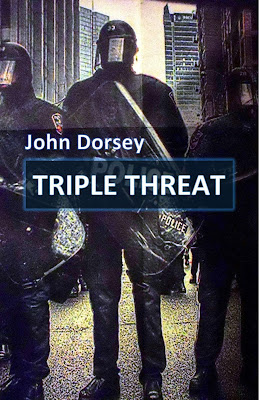 Crisis Chronicles Press is ecstatic to welcome the new year with the publication of John Dorsey's Triple Threat, a perfect bound collection of three chapbooks in one. John is widely esteemed as one of the best writers in America and his work is unique and essential.

Triple Threat is 55 pages, perfect bound, 5.5x8.5". Contents include The Dusty and Lofty Dreams of Middle Class Fairy Princesses (a very rare, long out-of-print chapbook from 2004) as well as Dorsey's more recent Street Maps for Lost Souls and Ghost on the Inside. ISBN: 978-1-64092-975-3. Front cover image by Steven B. Smith. 250 copies in print.

Join us in the St. Louis area on 18 January 2019 for a special book release event, George Wallace and John Dorsey Live at the Book House, 7352 Manchester Road, Maplewood, Missouri 63143. 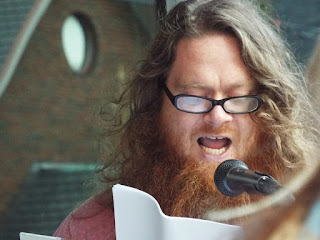 John Dorsey lived for several years in Toledo, Ohio. He is the author of several collections of poetry, including Teaching the Dead to Sing: The Outlaw's Prayer (Rose of Sharon Press, 2006), Sodomy is a City in New Jersey (American Mettle Books, 2010), Tombstone Factory (Epic Rites Press, 2013), Appalachian Frankenstein (GTK Press, 2015), Being the Fire (Tangerine Press, 2016) and Shoot the Messenger (Red Flag Press, 2017). He is the former Poet Laureate of Belle, MO and Co-Editor, with Jason Ryberg, of the Gasconade Review. His work has been nominated for the Pushcart Prize. You may reach him at archerevans@yahoo.com.
Posted by John B. Burroughs at 7:22 PM