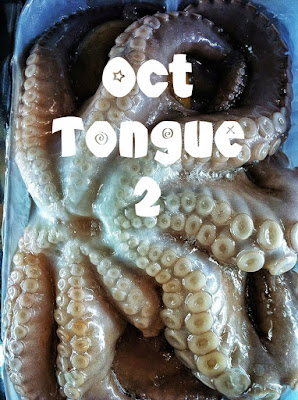 Achtung! Crisis Chronicles Press is pleased to present the long-awaited Oct Tongue 2, our biggest book yet (it's like eight books in one!). See October (and so much more) through the eyes of eight of America’s finest poets: George Wallace, Lyn Lifshin, Mark Sebastian Jordan, Juliet Cook, Kathleen Cerveny, Dianne Borsenik, Margaret Bashaar and Eric Anderson.

Each of these eight writers wrote and submitted at least 31 poems in response to editor John Burroughs' October 2014 poem-a-day invitation. Life intervened and it took awhile to get this fine collection into print, but we believe it is well worth the wait.  Oct Tongue 2 features 258 poems on 328 pages, and is 6"x9",  perfect bound, with cover photo by Chandra Alderman. ISBN: 978-1-940996-47-9. It will make you laugh, make you cry, make you angry and make you glad you read it.

Eric Anderson is a graduate of the Vermont College of Fine Arts. His poetry has appeared in The Sun, Connotation Press, Prairie Schooner and other journals. His novella, Isn't That Just Like You? (Cleveland State University Press) won the inaugural Ruthanne Wiley Memorial Novella Contest. His "A Couple of Scars on My Back" earned a Lantern Award for best poem from The Lit. And his first full-length collection, The Parable of the Room Spinning, is available from Kattywompus Press.

Margaret Bashaar’s first book, Stationed Near the Gateway, was released by Sundress Publications in 2015. Her poetry has also been collected in four chapbooks and dozens of literary journals and anthologies. She co-organizes the annual event FREE POEMS with Rachael Deacon. And she lives in Pittsburgh, PA, with her partner, her son, and her kitty cats, and edits Hyacinth Girl Press (hyacinthgirlpress.com).

Dianne Borsenik is active in the northern Ohio poetry scene and regional reading circuit. Her work has been widely published in journals and anthologies, including Pittsburgh Poetry Review, Rosebud, Slipstream, Lilliput Review, The Offbeat, Chiron Review, Poems-For-All, A Rustling and Waking Within (OPA, 2017), and Resist Much/Obey Little: Inaugural Poems for the Resistance (Spuyten Duyvil, 2017). Crisis Chronicles Press published her first full-length collection, Age of Aquarius, in 2016. She won first place in the Best Cleveland Poem Competition in 2013 and 2014, and Lit Youngstown put her poem “Disco” on their tee shirts, which makes her feel like a rock star. Founder/editor at NightBallet Press and producer of BeatStreet Cleveland, Borsenik lives in Elyria with husband James and dogs Bodhisattva and Michel-Angelo. Find her at dianneborsenik.com.

Kathleen Cerveny, has been a working artist, an award-winning producer for Cleveland Public Radio, and Director of Arts Initiatives for the Cleveland Foundation. Her poems have appeared in the Southern New Hampshire University journal Amoskeag, the e-journal Shaking Like a Mountain, and in several Pudding House anthologies, as well as in in Future Cycle Press’ international anthology Poems for Malala Yousafzai. In 2014 Kathleen received the Robert Bergman Award from the Cleveland Arts Prize and she served as the 2013-14 Poet Laureate of Cleveland Heights. Her first collection, Coming to Terms, was published by NightBallet Press in 2015. Kathleen’s blog, Pay Attention, can be found on her website, kathleencerveny.com. She currently teaches arts management in the Conservatory at Baldwin Wallace University.

Juliet Cook's poetry has appeared in a small multitude of magazines, including Arsenic Lobster, Diagram, Diode, FLAPPERHOUSE, Hermeneutic Chaos, Menacing Hedge and Reality Beach. She is the author of numerous poetry chapbooks, recently including Red Demolition (Shirt Pocket Press, 2014), a collaboration with Robert Cole called Mutant Neuron Codex Swarm (Hyacinth Girl Press, 2015), and a collaboration with j/j hastain called Dive Back Down (Dancing Girl Press, 2015), with more forthcoming. Cook's first full-length individual poetry book, Horrific Confection, was published by BlazeVOX and her second full-length individual poetry book, Malformed Confetti is forthcoming from Crisis Chronicles Press. Her most recent full-length poetry book, A Red Witch, Every Which Way, is a collaboration with j/j hastain published by Hysterical Books in 2016. Find her at JulietCook.weebly.com.

Mark Sebastian Jordan is a refugee of the corporate business world, where he spent a decade in packaging purchasing. Finding himself compulsively writing and creating to escape the unfulfilling day job, he fled when a corporate buyout ended his position. Since then, he has only worked jobs that offer personal fulfillment and creativity. He has written three full-length plays, several one-acts, and four books. He covers concerts of the Cleveland Orchestra for Seen & Heard International and performs widely as a director, actor, storyteller, and improv comedian. His humorous mystery Slammer, Private Dick was published by Sinister Hand Media in 2017.

Lyn Lifshin won the Jack Kerouac Award for her book Kiss the Skin Off, the Paterson Poetry Award for Before It’s Light, and the Texas Review Award for The Licorice Daughter: My Year with Ruffian. She’s been praised by Robert Frost, Ken Kesey, and Richard Eberhart, and is the subject of the award-winning documentary film Not Made of Glass. Lifshin earned the distinction “Queen of the Small Presses” for her dedication to the small presses which first published her, and for surviving on her own apart from any major publishing house or academic institution. Her most recent books include Femme Eterna (Glass Lyre, 2014), #AliveLikeALoadedGun (Transcendent Zero Press, 2016) and Little Dancer: The Degas Poems (NightBallet Press, 2017). Find her at lynlifshin.com.

George Wallace has been described as ‘a kind of Max Ernst stuck in the up-down elevator of America’ (A.D. Winans) and a poet who ‘navigates between high and low diction with generosity, elegance and power’ (Angelo Verga). “If you want to know what America feels like in your mouth, read his poems out loud,” writes Huffington Post’s Robert Peake. The editor of Poetrybay, co-editor of Great Weather for Media and author of 31 chapbooks, George is a fixture on the NYC scene and travels internationally to perform, lecture and teach workshops. Poet Laureate, Suffolk County, LI NY (2003-2005). Writer in residence, Walt Whitman Birthplace (2011-2017).
Posted by John B. Burroughs at 4:41 PM No comments: