Poet's bio (as of 2012, from the chapbook):
Chansonette Buck spent her childhood “on the road” as stepdaughter of a Black Mountain poet, living all over the American West, in England, and in Spain. She holds the PhD in English from the University of California, Berkeley, where she concentrated on 20th-century poetry and poetics and wrote a dissertation on childhood trauma as the source of William Carlos Williams's poetic obsessions. She has a BFA in painting from Massachusetts College of Art, and has won awards for her visual art, her poetry, and her teaching. Chapters of her memoir Unnecessary Turns: Growing Up Beat have appeared in Why We Ride: Women Writers on the Horses in Their Lives (Seal Press, May 2010) and Polarity eMagazine (Fall 2010). Her poems have appeared online and in print, including a feature in the journal tinfoildresses 2012. Her first chapbook, blood oranges (NightBallet Press, 2011), was nominated for a Pushcart Prize. She lives in Berkeley with her family, her boa constrictor, and way too many cats and dogs.
Posted by John B. Burroughs at 12:28 PM No comments: 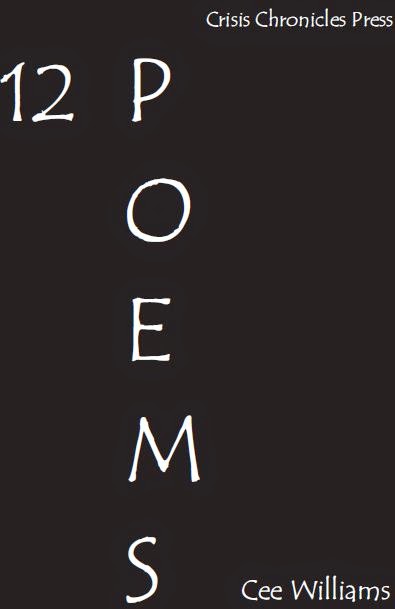 Cee Williams is a poet and spoken word artist residing in Erie, Pennsylvania. His work has appeared in the poetry and visual art journal Bathtub Gin (Pathwise Press) and in the Dwelling in Possibilities anthology edited by Berwyn Moore. In 2010 Williams was named as a finalist for the Erie County Poet Laureate award. He is the founder and director of Poets’ Hall: the International Fellowship of Poets and Spoken Word Artists, for which he was the recipient of the EMBYP 2011 award for Business Innovation.
Posted by John B. Burroughs at 11:13 AM No comments: