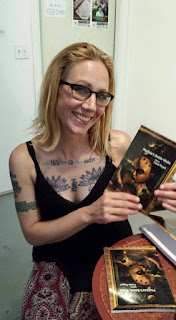 In 2015, Crisis Chronicles Press had the honor of publishing poet Tracie Morell's Matilda's Battle Waltz (CC#70) in paperback. For some time recently, it has been sold out and unavailable. But now, at the author's request, we are happy to re-release this marvelous series of poems (with illustrations by Kris Risto) as a free e-book. Read Matilda's Battle Waltz on Issuu or email jc@crisischronicles.com for a pdf copy.
“Tracie Morell’s work exhibits a lyrical acuity which illuminates and devastates. She leads us on a harrowing and electrifying journey through the life of Matilda, a being who dances on the brink of existence between what is marginalized and what has risen above to live in rarified air. Morell has no fear; our eyes blaze and dilate with Matilda, as we bear witness to our collective ruin. Morell’s poems celebrate the connections between the interior and exterior world and in doing so, take us closer to both.”
—Kelly Boyker, Poetry Editor at Menacing Hedge
Posted by John B. Burroughs at 9:00 AM No comments: