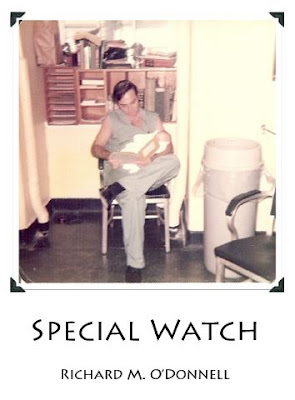 Crisis Chronicles Press is happy to announce the publication of Special Watch, a chapbook by Richard M. O'Donnell, on 31 January 2016. These prose poems are sensitive and often dark true accounts from the author's time working around maternity, pediatrics and the mentally disturbed at the nation's oldest naval hospital in Portsmouth, Virginia. A compelling read!

Richard M. O'Donnell‘s works have appeared in many venues including Sniplits audio stories, Everyday Poets, Everyday Fiction, the North Coast Review and The Gamut, to name a few.  He is the co-founder and facilitator of The Oberlin Writers Group and the founder and facilitator of the Infinite Monkey Sci-fi/Fantasy Writers.  A link to his online publications and YouTube films is available at www.wormsview.com.
Posted by John B. Burroughs at 3:22 PM No comments:

The Gravity of Chainsaws - by Azriel Johnson (CC#76)

Crisis Chronicles Press is thrilled to announce the publication of Azriel Johnson's latest poetry chapbook, The Gravity of Chainsaws,  on 18 January 2016. This themed cycle of poems is being called Johnson's best work yet, and we agree. Get it while it's hot.


Join us for the official book launch (and author's birthday bash) on 18 January 2016 from 7 to 9 p.m. during Stark Knights at Cultured Coffee Co, 309 Cleveland Avenue NW in Canton, Ohio.

Azriel Johnson is a poet, novelist, and all around shady character; an ink spatter analyst by day and a serial writer by night; shaman of the International Temple of Self Expression; and the founder and director of Writing Knights Press. His other books include Hellfire, Heavensent thru Writing Knights, Poemaholic thru The Poet's Haven and his recently released fantasy / alternate history novel Sunset Red.
Posted by John B. Burroughs at 12:58 PM No comments: