We are thrilled to announce the publication of intoxicating new work by UK poet Bradford Middleton on 14 November 2015. Drink Drank Drunk is a pamphlet of poems on the joys or otherwise of drinking, the latest release in Crisis Chronicles' Ninesense series of 9 poem chapbooks by writers you ought to know.  Available for a mere $4.99 in the USA (a few dollars more for overseas orders). 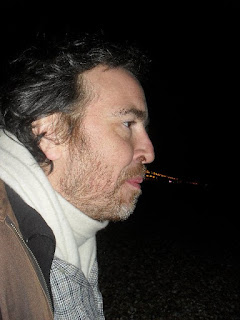 Bradford Middleton was born in southeast London in 1971. He spent the next 30 years desperate to either get to the middle or get out, he could never decide, and eventually landed above a pseudo-legendary punk record shop in Croydon. After six years it became too much and he moved back deeper into south London and somehow landed a job. He went back to university and then aged 34 he finally got the chance to go away to university to study at postgraduate level in something interesting but not exactly vocational. Within a year he landed in Brighton and began writing crazy stories and poems of outrage and insanity. At the age of 38 he finally decided to show someone his work, and a series of editors received strange tales and bizarre poetry as he eschewed the influence of his friends. Just before his 40th birthday the Mad Swirl, those glorious souls from Dallas, USA, published his first poem, a joyous ode to losing your mind. That is not included here, so you’ll have to go find it online. He has, as of 2015, accumulated over 100 unique publications in various places including Empty Mirror; Zygote in My Coffee; Ppigpenn; Word Riot; Rolling Thunder Quarterly; The Camel Saloon; Fuck Art, Let’s Dance; Dead Snakes; The Weekenders; and Electric Windmill Press, as well as some others. His debut novel, DIVE, is now available from New Pulp Press. Follow @beatnikbraduk on Twitter.
Posted by John B. Burroughs at 5:48 PM