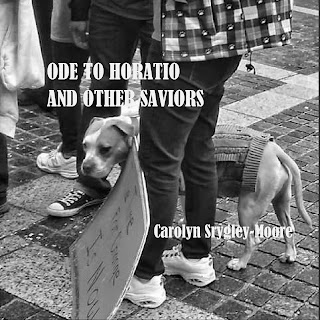 Crisis Chronicles Press is pleased to present our long-awaited latest title, Ode to Horatio and Other Saviors, a compelling collection of poetry by Carolyn Srygley-Moore.
Ode to Horatio and Other Saviors is 92 pages, perfect bound, 6x6" and illustrated. ISBN: 978-1-64092-948-7. Front and back cover photos provided by the author. Available now for only $12 from Crisis Chronicles Press, 3431 George Avenue, Parma, Ohio 44134 USA. A percentage of all proceeds from the sale of this book will go to support Rescue Dogs Rescue Soldiers, an organization that pairs shelter dogs with veterans and provides pet therapy programs. 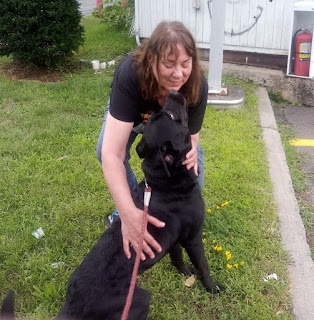 Carolyn Srygley-Moore (C Leigh Moore) is a writer who has encountered a variety of issues in her career. She has been published in Red Fez, I Am Not a Silent Poet, and other venues. Ode to Horatio parallels the plight of humanity with the plight of dogs randomly placed on death row. Carolyn's falling in love with the pit bull was ostensibly the beginning of years advocating for victims of breed specific legislation, including all breeds deemed dangerous by landlords and insurance pitfalls. She found the greatest meaning in her endeavors as transporter from shelter to adopter to foster etc. from winter 2019 to 20. Carolyn has had two emergency craniotomies leaving her with the current inability to drive. As well as caring for her own rescued pets, this elegy is the writer’s current contribution to the cause. Carolyn is a graduate of Johns Hopkins University in Baltimore, where she recalls the night she fell passionately in love with language. Forty years later, that passion has lasted.
Posted by John B. Burroughs at 4:23 PM No comments: 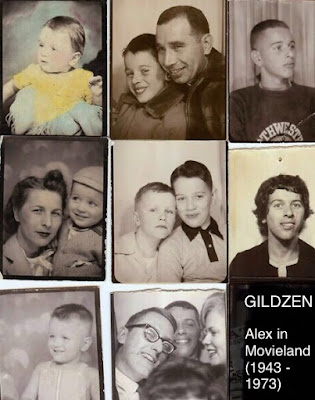 Crisis Chronicles Press is honored and ecstatic to celebrate Valentine's Day with the publication of Alex in Movieland (1943-1973), a major work by one of our favorite writers and artists, Alex Gildzen.

Click here to read a 2009 Otoliths interview with Gildzen wherein he talks about the origins and evolution of Alex in Movieland, which he began writing in 1996 and is still writing. Our new Crisis Chronicles volume is the first time the entire first thirty years of it have appeared in print.

Alex Gildzen lives in Palm Springs where he writes every day. In the past year his poems have appeared in the anthologies "Love Jets" and "The End of the World Project." He also makes art — from collages to conceptual pieces such as "The Century Dimes" and "Box of Little Bags." In addition he's become a model — with and without clothes — for artists and photographers.